We are all very excited about our brand new show Buffalo Billy, going live this Easter break! This wild west extravaganza will see our fabulous pair, Billy and Bonnie Bear, in a town ruled by a gang of pesky bandits. Who will come to the rescue?

We had the opportunity to catch up with the show’s producer, Glenn Terrell, and ask a few questions about this brand new show and what to expect!

Firstly, tell us a little bit about the show, what can people expect?
To tell you a bit about the show;  Buffalo Billy,  I would start by saying people can expect a fun-filled, clap along’ musical adventure where we see Billy Bear ride into a small western town ruled by a money hungry mayor. The townsfolk are in need of a hero, but will Billy Bear be able to live up to what they’re looking for? It has songs, dance, drama and even a white-tailed prairie dog called Monty.

What are the first steps you take in creating something like Buffalo Billy?
The first steps in the show creative, after the initial idea, is to start with the script. The script, as your writing it, will be the base for all other show elements, the casting, props, set, costume, music production, lighting and any special effects needed. It’s extremely important to get the script complete or near complete as early as possible to ensure you have time to prepare the other show elements. So this is always where I start.

How long did it take you to write and what are your top tips for writing a show?
The length in which it took to write this show spanned over a course of weeks, as I tend to draft sections and ideas, leave it for a while then come back to it, then add more ‘meat to the bones’ as each section grows. The script goes through several draft stages right up until recording, certain lines may not work in the studio when you hear it them out loud. It’s an organic process, but I often find it easier to write ‘too much’ and then make cuts to the dialogue to tighten up the flow of the show.
My top tips for writing a script are to ensure you know where the story / show is going. Do not just start writing, have a draft plan of the beginning, middle and end. The other top tip is to know your audience and the characters in the show. Luckily I have known Billy Bear for a very long time so I know what he can bring to a show.

How long does it take to create a show like this, what are the biggest challenges?
The time in which it takes to create a show like this is about five months from initial idea to opening it, but this is not five months of solid work on the show. I tend to focus on sections and areas at different times. So the script is always first. I will the spend time designing costumes, then the set and so on until it’s all complete. The biggest challenges are usually just directional ones, I tend to work that I try to overcome and foresee most things, but every now and then something will happen in a rehearsal that has not been thought of, but there is always a way of overcoming these challenges.

What is your favourite part of the show?
If I had to name or say I had a favourite part of the show, then it would be a jail scene with Billy and Bonnie Bear and Monty the jailhouse keeper. There is something endearing about the drama of the scene and being that it’s Billy Bear, he makes it his own. However there are many points in the show I could pick out, but the jail scene never fails to make me smile.

What is it like to work with the wonderfully talented Billy and Bonnie Bear?
Well, I have been working with them for a long time and I can definitely say it’s always fun! They both make me smile so much, Billy tends to have more comedy about him but I love that Bonnie brings him in check when he gets carried away with himself. They both work very hard and love performing in shows for all the boys and girls. It’s true to say they are both very good friends of mine and they really make the shows at Butlin’s fun to work on. 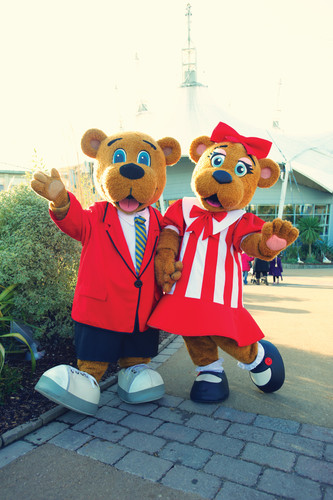 Because this show is so new, we don’t have any photographs to show you yet! But stay tuned, we will be posting lots of wonderful shots on our Facebook page, so keep your eyes peeled! If you’re going to see Buffalo Billy today at one of our resorts, let us know what you thought! You can tweet us @butlins, or leave comments on our Facebook page.