It is an absolute staple of any British holiday – making sandcastles on the beach.

Ask anyone for something they associate with spending time on the beach, and sand/sandcastles will appear very close to the top of the list and, for many people, right at the top.

Our three resorts are blessed with great locations, right next to three wonderful beaches where the young – and young at heart – can build sandcastles to their heart’s content, as well as all those other beach classics like skimming stones in the waves, having a game of Frisbee or simply just opening up a deckchair and catching a few rays. 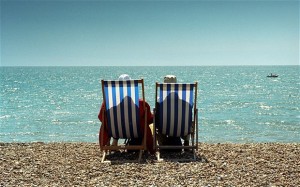 I have vivid memories of taking my two sons to Minehead, right from when my eldest was 18 months old (he’s 13 now, and probably won’t thank me for sharing my recollections). We used to enjoy Butlins breaks with a group of friends who all had children of the same age, and back in 2003 we spent a brilliant four-night break in Minehead. Six families of three, all with a toddler eager to sample the delights of the beach for the first time. 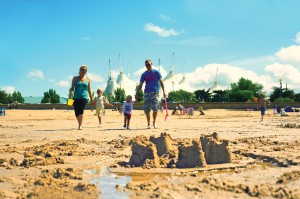 We spent a whole day, from after breakfast until teatime, on that wonderful expanse of sand right outside the Minehead resort. It was lovely to watch six 18-month-old children discovering sand, paddling, seashells, seaweed….

It was the sand that really got them though, and we have photographs of the six of them sat in a sort of circle with a mixture of spades and buckets making a variety of holes, mounds and – with parental help – castles.

Wind forward more than a decade and I was back in Minehead beach last summer. It’s obviously a rather different experience with two boys who were then nine and 12. They weren’t happy with a simple sandcastle or even a basic hole. Oh no, we had to have small towns with moats around them (I blame Minecraft).

And when that didn’t satisfy their sand-fun craving, they decided it would be a good idea if Aidan (the eldest) buried his younger brother Liam, neck-deep, in a giant beach hole. I’m sharing the picture here as proof, and you can just about see the top of the Skyline in the background. To be fair, Liam was kneeling in the hole as even a massively enthusiastic elder brother armed with a decent spade can’t dig a hole deep enough for a nine-year-old to stand in! 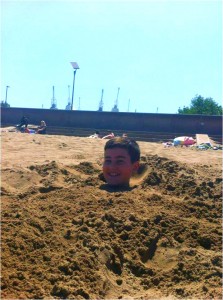 Buried in the sand!

However, it was another reminder that age doesn’t diminish the love of sand, and just how much free fun is on offer to our guests when they take a few steps outside of our resorts and enjoy our beaches.

To be fair to my two sons, I should also mention that my own irrational fear/hatred of sand (apparently it’s called eremikophobia!) means I managed to spend every minute of every visit to every beach with my trainers and socks still firmly on my feet. I also need to have a decent supply of wet wipes handy!

Nonetheless, my pleasure came from my children’s pleasure, and while I simply don’t like the stuff, they – like millions of other children – just love sand. It has given us some brilliant family memories and there are pictures dotted around our house of my boys utterly absorbed in a day of sand fun on Minehead beach. 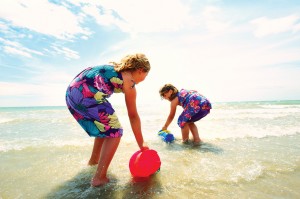 Paddling at the seaside

If you’re visiting Butlin’s this summer, make time for the beach!