During the summer we hosted a team football tournament here at our Bognor Regis resort to help raise money for Great Ormond Street Hospital Children’s Charity. This internal team tournament has raised an impressive £500 – here’s how our 2015 team tournament panned out…

A highlight of the tournament was the very first game – an absolute thriller with Sales taking on Resort Catering. Sales were off to a flying start as they went 3-1 up by half time. Sales started the second half the strongest with another goal to make the game 4-1. The match seemed to be wrapped up until a sudden change of fortune from Catering as they fought back and made it 4-3, before scoring an equaliser with literally a few seconds to spare! Final score 4-4.

On the second day we had Sports taking on Shops, and Accommodation taking on Bars. Our Sports team were looking all geared up and ready for the occasion! A unisex team competed in a match of ‘goals galore’! The girls proved to be some of their best players and a great game was played with Sports dominating possession and shots on goal! The final score was a convincing 10-0.

Accommodation went 2-0 up against Bars early on. Although Bars regrouped at half time and pulled together creating several opportunities and near misses, it never quite went their way and they fell to a 2-0 defeat.

After weeks of group matches we reached the highly anticipated knockout stages where the top two departments from each group went through to play in the finals. Sports and Splash went through from Group 1 and Sales and Catering progressed from Group 2. As knockout games began the atmosphere around resort certainly did not drop and everyone was eagerly anticipating the upcoming finals! 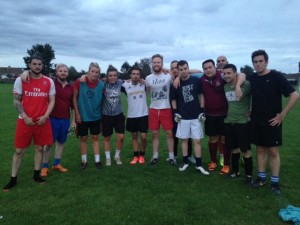 Sales played splash in the first of the semi finals. Splash struggled to get a team together to begin with but luckily they found a fifth man to complete the team. Sales started the strongest going 1-0 up. Splash responded quickly and within 60 seconds fired home an equaliser bringing the game to 1-1. Sales scored a second before another quick response from Splash meant the game hung in the balance at 2-2. The second half saw both teams came out fighting and a thoroughly entertaining end-to-end match resulted in Sales clinching victory and progressing through to the finals with a 5-2 win.

The next game was Sports v Catering. Sports got off to a flying start going 1-0 up in the first 20 seconds of the match. Both teams were playing really well however a lapse of concentration by Sports led to an own goal which bought the score to 1-1. Sports regained their composure with a truly amazing goal from the keeper in his own half! Catering once again scored and equalised making it 2-2 at half time. Despite Sports’ domination during the second half a sloppy pass back put Catering through on goal and they scored to wrap up a 3-2 victory.

It was all or nothing for the two teams from Catering and Sales going head to head in this year’s final. Many team members turned up to watch the match and it didn’t disappoint, with victory going to Catering!! 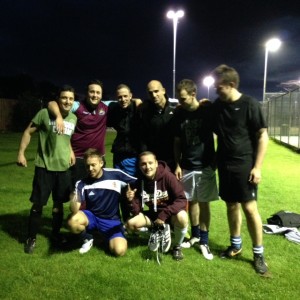 If you would like to donate please text BUTL60 and your amount to 70070.